A gold mine of information

"A gold mine of information'

A gold mine of information 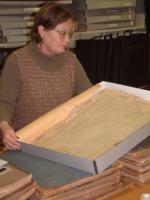 Phil Vogler is a self-professed "history freak" whose fascination with the past has been fuelled by archives of The Register.

For years and years the Berwick resident spent time perusing the pages of Register editions dating back to the late 1800s. Researching the past became "almost an obsession" for Vogler, for whom the old newspaper stories "put flesh on the bones of people long gone," he said.

Starting with the 1897 editions, Vogler initially "did a lot of cherry picking, just reading stuff here and there." He soon developed a specific interest in the Bay of Fundy and the lives of the people who made their living on it.

"When I started to zero in on people and families in the area, I just started digging. The Register is essentially a history book, a resource that reflects life way back when," acknowledged Vogler.

His regular examination of the newspaper's archives lead him to delve into the genealogy of families in the Western Kings area.

"It was a gold mine of information," said Vogler. "I bet I know more about families here than people who have lived (in Berwick) their whole lives."

Vogler also learned Berwick had been home to people who had "international impact." He said most people are unaware that Lawrence A. Highland, who hailed from the North Mountain area of Burlington, worked closely with Howard Hughes in his aircraft company. Or that A. Levy Chipman ran John D. Rockefeller's real estate holdings.

"The newspaper reports the Rockefellers were regular visitors to Berwick during that time. Who would have thought? The Rockefellers in Berwick," mused Vogler.

In 1998 he established a website devoted to sharing information he had extracted from the Berwick Register archives. Consisting "mainly of births, marriages, deaths, community columns and various stories relating to the Annapolis Valley and surrounding areas," Vogler shared the information with anyone who came looking for family history. In the process he "met and helped some wonderful people," all who were anxious to learn more about their family history.

"It was nice to be able to do that for them."

Vogler shared his enthusiasm for old newspapers with Pat Hampsey, a fellow Berwick historian who "knew the old Registers inside and out.

"If you needed information on a certain event or person, Pat could remember exactly what edition, sometimes even what page. He was a walking index," Vogler explained.

Hampsey, who passed away in December 2010, also immersed himself in the archives and over the years turned the information he gleaned into a history column for the paper and several books of his own, all focusing on the early history of the Berwick area.

Vogler misses the days when he could drop into The Register office on his lunch hour and get lost in the pages of history. The Register archives are now housed at Acadia University to preserve them for future generations.

"The Register was more than just the news of the day. It was Berwick"s lifeline to all of the world." - Phil Vogler

"Whether I was reading a community column, local sales ads or letters home from the Boer War and the First World War, I was always amazed at the lives that people have lived and how life has changed," recollected Vogler.

"The Register was more than just the news of the day. It was Berwick's lifeline to all of the world."

What: The newspaper of the Berwick area

First editor and publisher: John E. Woodworth. He remained in the position until his retirement in 1918.

Recent history: R.B. Cameron purchased The Register in 1980 from Pat Hardy. Cameron owned the business until 2002 when Optipress purchased it. In 2004 The Register, along with the chain of Western Nova Scotia papers became part of the Transcontinental Media Group.